You already have a functioning Android app, but it needs multilingual support? This Android Studio tutorial will guide you through the Android i18n process.

This basic Android Studio tutorial will give you an overview of how to get started with your Android internationalization process. We assume that you already have a functioning Android application.

What is Internationalization in Android Studio?

Before we move on to the code, we must understand what internationalization of an Android app entails.

In an Android OS based mobile device, users have a locale set, based on their location and their preferences. Whenever an application starts, that application can decide to respect the preference set by the user and show all the text in the app based on their set language.

Internationalizing one's application is a great way to also increase one's userbase, as product users don’t feel limited due to the presence of a foreign language which they might not even understand.

For this lesson, we will be making an Android application using the Android Studio IDE. The Android Studio IDE will get the user locale, set on the device and automatically also set the language of the application to be the same. Of course, we will be demonstrating this with only a limited number of languages in this demo, three to be exact: English, Japanese and French.

We will try to keep the project simple and try to build two functionalities which are complementary to each other when it comes to creating an excellent and localized user experience for the end user:

Setting up the project

Let's make a new project in Android Studio as below: We named our application "AndroidInternationalization" and it will be supporting three languages.

In Android, dependencies are managed using the Gradle build tool. When we make a project using Android Studio, it automatically adds the dependencies it needs to set up a project.

For the sake of keeping this guide simple - you might also have different versions of dependencies and SDK versions - here is our app level build.gradle file for this project:

We also have a root level dependency build.gradle file and here are the contents of the file:

This what it looks like when using Android Studio Version 3.0.1, which is what we used for this tutorial.

To give our localization process a kick start for the three supported languages, we will create some new folders and files in the res folder in our project structure. The file structure now looks as follows: See how there are three, similarly named folders for values:

We have also added the same file (strings.xml) in all the three folders.

For now, we will run our application multiple times and will only change the device's locale so that app can show changes in the locale:

Of course, the default locale shown above reflects the English language being used. Let's change this now to Japanese: 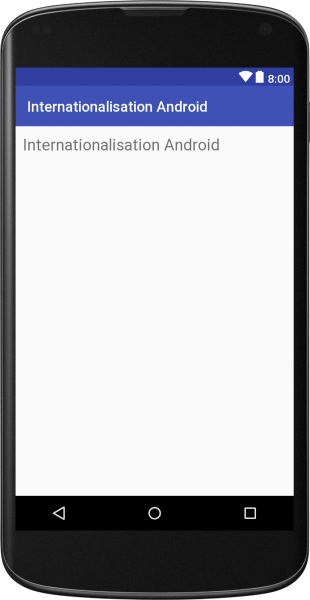 This was the simplest demonstration of an internationalization support of our app. The best thing about this was that we actually didn't have to do any configuration for this in our app or on our device. The application just picked the locale from the device and used that language in the app as well.

One thing to note here is if the Android cannot find a language locale's file or just a particular String in the locale-specific file, it will switch either completely or just for that specific String to the default English Strings file. This enables us to show the user something rather than nothing at all!

If you want to perform some dynamic localization in your project and not through the Strings resource file, you have two options. We will explain these options along with the use cases:

Internationalization is a great way to increase users on a product so there are no limits in terms of how users use your product.

However, writing code to localize your app is one task, but working with translations comes with a whole new set of challenges. Fortunately, Phrase can make your life as a developer easier! Feel free to learn more about Phrase, referring to the Phrase Localization Suite.

If you're interested in the topic of i18n in the Backend using Spring Boot, make sure to check out our other article which also takes a closer look at spring boot localization.