How to Write a Vim Plugin with Ruby

Every few months we have two Hackdays that we set aside to work on unrelated projects. For my last project, I built a Vim plugin using Ruby.

In this article, I'll give you a brief overview and a starting point from which you can develop your own plugins for Vim using Ruby.

Learning VimScript in two days seemed like quite the challenge but I was up for it and after some initial research I decided to use Ruby to develop the plugin.

First we'll take a look at the file structure that a modern Vim plugin should follow so that it can be installed using tools such as pathogen.vim or Vundle.

There are many directories that you can create in your plugin root path that will contain a special meaning for loading the plugin. Here I've decided to focus on the most important:

If using Ruby inside your VimScript, Vim will need to be compiled with +ruby. You can check this for your Vim installation with vim --version. If it is listing +ruby , Vim was compiled with ruby support.

This allows you to do things like use Ruby's powerful Standard Library and RubyGems. You also won't have to dive as deeply into VimScript.

As you can probably see, all files in the plugin directory are loaded when you start up Vim.

All that you need to do in order to get started is to create a file with the ".vim" extension in that plugin directory. This file contains the VimScript that defines the functionality that should be provided by your plugin.

VimScript provides the ruby command that can be used to execute some Ruby code.

Instead of using another VimScript function we can instead refer to it as a Ruby function or executed Ruby code. For a single line of Ruby code we can use the ruby command followed by your Ruby code.

To embed multiple lines of Ruby code there is a syntax that seems quite similar to the syntax Ruby allows for multi-line stings:

These techniques will allow you to simply separate your Ruby code into different .rb files and list them as ruby require "my_module".

To make this work, the path of the Ruby files must be added to a load path by doing something equal to ruby $LOAD_PATH.unshift File.join(File.dirname(Vim.evaluate('expand("<sfile>")')), 'lib')

If the ruby files are placed under plugin/lib/. expand("<sfile>") they can be used in VimScript to get the directory of the current file (see :help sfile).

By moving the Ruby code into separate files outside of the VimScript it becomes easy to test with test frameworks such as minitest or RSpec.

If you are using Ruby inside VimScript you will be provided with the Vim Module. 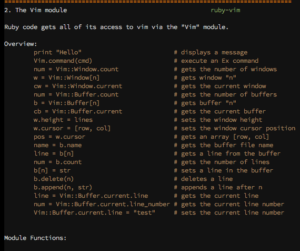 This allows you to access buffer settings and other Vim related items needed for the development of your Vim plugin.

For example, in order to get the current buffer you can call Vim::Buffer.current.

Alternatively, another command already placed in the section before is Vim.evaluate()

In order to evaluate a VimScript snippet, we need to get the path of the current file. :help ruby This will provide some  great documentation of the functions provided.

I hope that this short article helps to give you a starting point for developing your own Vim plugins and a nudge towards publishing them to the community.

While using Ruby for Vim plugin development does add a dependency on Ruby to your plugin, it will still offer you a lot of benefits such as the following.

If you're looking to learn more, the following resources are good for digging deeper into the topic:

Kick-start your browser JavaScript localization with this comprehensive guide and make your application ready for international users.
Home / Blog / How to Write a Vim Plugin with Ruby